A Message from Elaine

A Message from our VP, Health, Safety, Environment and Sustainability 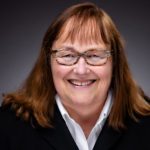 The journey we’re on as an environmentally focused company is one that is both inspiring and exciting. Ecovyst is deeply committed to providing innovative product solutions to our customers to enable them to achieve their sustainability goals. This commitment is evident in the everyday work we do and the goals and aspirations we have set for Ecovyst in reducing its own environmental footprint. We align with applicable UN Sustainable Development Goals (UN SDGs), the Global Reporting Index (GRI) Standards, and the Sustainability Accounting Standards Board (SASB). We use their metrics to establish goals for the organization and believe that we have developed a solid foundation as a result.

We are dedicated to achieving our 2025 and 2030 goals and remain committed to our journey. Our approach, sense of ethics, and desire to have excellent performance will drive the future state of Ecovyst. We are confident that our commitment to sustainability will yield long-term benefits to our employees, our customers and their end-users, and the communities which we serve.

We create sustainable products that are safe for the environment, reduce waste and increase efficiencies for our customers and stakeholders. At Ecovyst, we are gaining momentum in our journey to achieve sustainability improvements across our global business. We believe that creating environmentally responsible products makes a real difference in people’s daily lives and for our planet.

Our key businesses, Ecoservices and Catalyst Technologies, are each advancing sustainability through their business practices.

At Ecovyst, we are fully committed to ensuring the health, safety, and well-being of our employees, our contractors, our customers, our community and the environment.

We strive for ethical and responsible working conditions that safeguard our neighbors and guide us towards a more sustainable future. We are dedicated to always “Doing the Right Things” and taking personal responsibility to better protect the environment and reduce our footprint.

Our HSES Policy focuses on safety, personal accountability and HSES performance. We center on continual improvement and voluntary participation in Responsible Care®, RC 14001® and ISO 14001.

Acting on Our Sustainability Goals

Our Commitment to Environmental Stewardship

As our history shows, we have a long-standing commitment to creating products that are considered safer for the environment as well as people. We are dedicated to the efficient use of resources while striving to minimize the potential negative impacts of our operations.

Ecovyst’s sustainability and engineering professionals collaborate to reduce energy consumption and improve waste management practices, sharing best practices across the organization. Our HSE&S professionals worldwide are empowered to drive improvements in partnership with the wider organization through focused initiatives that meet the local needs of sites, communities, customers, and other stakeholders.

Building a Plan Around the UN SDGs

We are aligned behind the United Nations Global Compact’s Sustainable Development Goals (SDGs) through our:

We continue to evaluate our business and establish goals against the UN SDGs which most align with our organization.

Our Commitment to Responsible Care®

We are fully committed to the health, safety, and security of our employees, customers and end-users. We strive to improve health, safety, environment, and sustainability (HSE&S) performance for processes, products, and facilities across our organization and our operating systems.

We believe our adherence to Responsible Care® allows us to not only naturally enhance our performance, but also improve the health and safety of our employees, the communities in which we operate and the overall environment.

Ecovyst regularly and on a scheduled basis, performs external audits of financials, compliance and Health, Safety, Environment and Security (HSES) obligations. Additionally, we conduct ongoing internal audits of our HSES management systems and 20 Ecovyst Principles relating to behavioral safety and operating safety, quality procedures, risk identification, financials and compliance to ensure we are meeting or exceeding top industry and internal standards of excellence.

We audit health, safety, environment and security (HSES) using third-party verification systems and auditors, including Responsible Care® (RC) 14001 with joint ISO 14001 certification and, in some cases ISO 9001 as part of our adherence to the concept of “Plan-Do-Check-Act.” This approach allows us to prioritize resources; execute plans and implement controls; monitor progress and continually improve. We track our internal audit processes across the organization, and we use this data and sharing of Best Practices as part of ongoing enhancement efforts.

Our rigorous Enterprise Risk Management (“ERM”) process enables our team to evaluate and address operational and compliance risks that we face in our businesses.

Our Chairman, President and CEO has established a multi-disciplinary ERM council that examines and oversees risk reduction measures for strategic, financial, credit market, liquidity, security, property, legal, regulatory, reputational and other risks. Led by our General Counsel and Director of Internal Audit, our ERM Council regularly reports on our ERM efforts to our Board Audit Committee.

As we look to the future, we understand that we, as a specialty catalysts and services company, have a key role to play in creating products that are safe for our employees, our customers and the environment.

We are driven by the spirit of Responsible Care® in our efforts to be good stewards of the environment and pledge to keep doing so moving forward.

“In 2019, our Refining business safely recycled 4.9 million barrels of spent sulfuric acid for refineries. We recovered over 100,000 MW of electricity and generated Sulfuric Acid products used to produce Alkylate, a high-octane gasoline component, as well as many other widely used basic materials. Our 2020 goal is to increase our recycling capabilities to over 5.1 million barrels.”

“Our Zeolite Catalysts product group produces innovative materials that reduce Nitrogen Oxide (NOx) emissions from diesel engines by a minimum of 80% and reduce sulfur in fuels, helping drive sustainable clean air solutions. For over three decades, we have operated this group through our Zeolyst International Joint Venture.”

“In 2020, we recycled over 4.1 million barrels of spent sulfuric acid, contributing to the circular economy, and in 2021, we are on pace to recycle 4.3 million barrels,” said Kurt Bitting, Chief Executive Officer, Ecovyst. He continued, “Our sulfuric acid is also used beyond typical refining applications, and its potential is significant. It is additionally used for various industrial and agricultural uses like fertilizers, batteries, steel, paper, wastewater processing, and pharmaceuticals. Because of this, we will continue to explore ways to increase our recycling capabilities year over year relative to our increases in production. The sustainable aspects of our processes are critically important as we assess and continue to try to reduce our environmental footprint.”

Sulfuric acid becomes spent acid once it is utilized in the refinery alkylation process. Spent sulfuric acid is not usable due to hydrocarbon contamination. The regeneration process decomposes the spent acid into a gaseous sulfur dioxide, where it is then converted back into fresh Sulfuric Acid.

This diagram illustrates the process of regenerating the spent acid into fresh acid. At Ecoservices, over 99% of the regenerated sulfuric acid goes back to the refineries while avoiding landfills or deep well disposal of waste fuels. 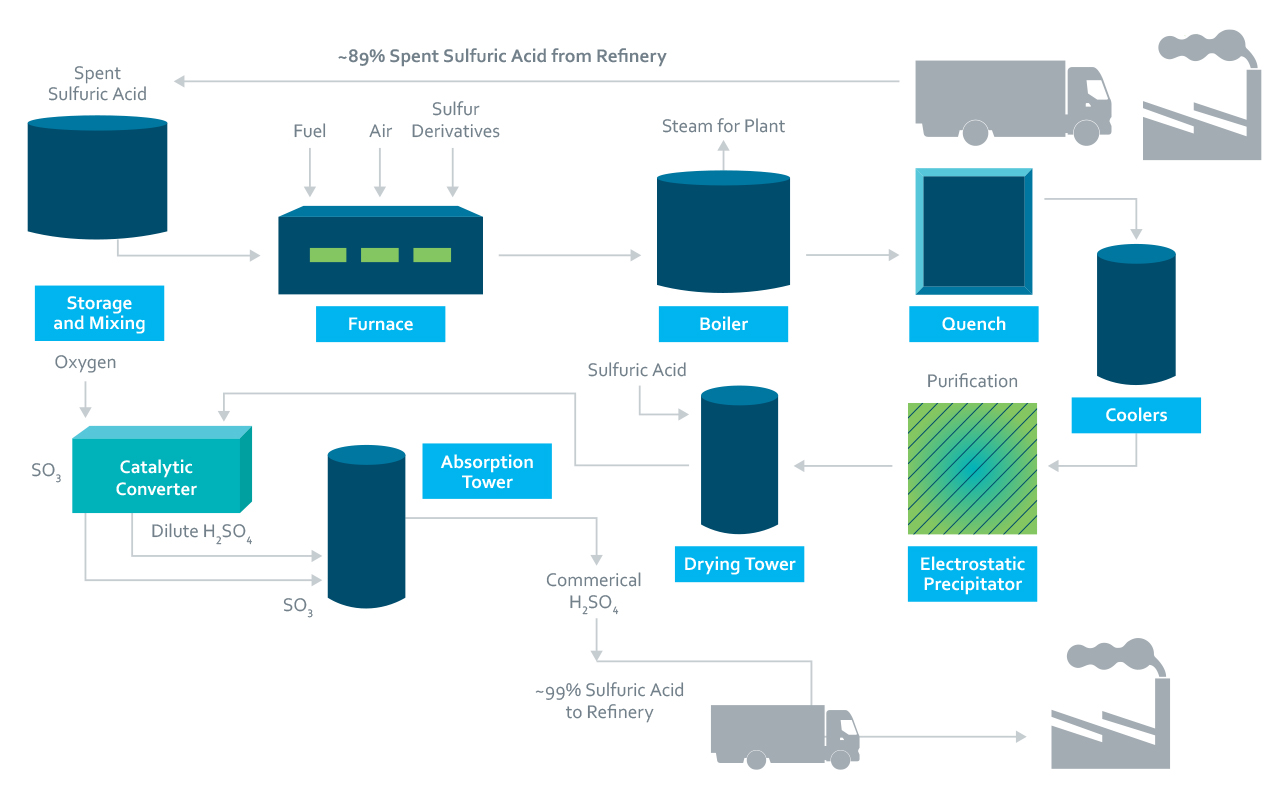 Ecoservices recovers the waste heat generated from the recycling and sulfur incineration process. That waste heat produces steam which is captured and then converted into truly renewable electricity by our turbine generators. The electricity generated powers the Ecoservices plants or is exported to the local grid. Bitting continued, “Through the steam recovery to electricity process, we can produce 100% of our total electricity demand, the equivalent of powering more than 13,000 residences.”

By capturing the heat in our production process, Ecoservices reduces its impact to the grid, and in some cases, we even sell excess renewable power back to the grid. According to Bitting, “Our sulfuric acid plants are sources of carbon-free energy because we reuse the heat produced by our process to create renewable energy. This results in reduced consumption of traditional power derived from non-renewable sources.”

Sustainability: A Catalyst For Change

At Ecoyvst, we are developing and delivering products that are better for you and better for the planet.