MALVERN, Pa.–(BUSINESS WIRE)– Ecovyst Inc. (NYSE: ECVT) (“Ecovyst”), a global provider of specialty catalysts and services, announces that it has achieved a Gold sustainability rating from EcoVadis. This accreditation recognizes Ecovyst’s ongoing commitment to a more sustainable future and its progress in integrating the principles of sustainability and corporate social responsibility into its business practices and management systems. Our Gold Medal rating score places us in the 97th percentile of companies EcoVadis rated in our peer group.

“Through our dedication to continuous improvement, Ecovyst strives to advance and promote sustainable technologies and business practices for the benefit of all of our stakeholders, including our customers, suppliers, employees and our investors. Our commitment to recycling sulfuric acid, producing catalysts that enable the production of clean and renewable fuels and reduced vehicle emissions, as well as our active and responsible involvement with our surrounding communities, demonstrates Ecovyst’s long-term commitment to sustainability,” said Kurt J. Bitting, Ecovyst’s Chief Executive Officer. “We are proud that the sustainability efforts of all of our Ecovyst colleagues have been recognized with the achievement of the EcoVadis’ Gold rating.”

Since its founding in 2007, EcoVadis has grown to become the world’s largest and most trusted provider of business sustainability ratings, creating a global network of more than 100,000+ rated companies. The EcoVadis sustainability assessment methodology evaluates how well a company has integrated the principles of Sustainability/Corporate Social Responsibility into its business and management systems. The methodology is built on international sustainability standards, including the Global Reporting Initiative, the United Nations Global Compact, and ISO 26000. The Sustainability Scorecard is focused on performance across 21 indicators in four themes: Environment, Labor and Human Rights, Ethics and Sustainable Procurement.

Ecovyst Inc. and subsidiaries is a leading integrated and innovative global provider of specialty catalysts and services. We support customers globally through our strategically located network of manufacturing facilities. We believe that our products, which are predominantly inorganic, and services contribute to improving the sustainability of the environment.

We have two uniquely positioned specialty businesses: Ecoservices provides sulfuric acid recycling to the North American refining industry for the production of alkylate and provides on-purpose virgin sulfuric acid for water treatment, mining, and industrial applications; and Catalyst Technologies provides finished silica catalysts and catalyst supports necessary to produce high strength and high stiffness plastics and, through its Zeolyst joint venture, supplies zeolites used for catalysts that remove nitrogen oxides from diesel engine emissions as well as sulfur from fuels during the refining process. For more information, see our website at https://www.ecovyst.com.

New CEO Kurt Bitting aims to supercharge growth heading into the energy transition. Ecovyst focuses on both ends of the fuels spectrum – petroleum and renewables. 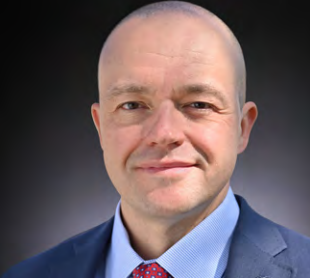 “Those are emerging and fastgrowing technologies that have a lot of runway when you’re talking about renewable fuels. We have a nice exposure in this sector”

Ecovyst’s new CEO expects demand to remain resilient for its sulphuric acid and catalysts, which are used to make petroleum based-fuels and polyethylene (PE) as well as renewable fuels and mining metals needed to make lithium-ion batteries and copper wiring.

The company’s new CEO, Kurt Bitting, has been with Ecovyst since 2006, when he joined the Ecoservices business when it was part of Rhodia. During his time in Ecoservices, the business became part of PQ. In 2021, PQ changed its name to Ecovyst, and it sold its Performance Chemicals business for $1.1bn.

It kept its Ecoservices business, its catalyst business and a 50% stake in the Zeolyst joint venture with Shell. That same year, Ecovyst agreed to pay $44m to acquire Chem32, a company that sulphides and activates catalysts and absorbents used in refining and petrochemical production. The acquisitions and divestments gave Ecovyst an easy-to-understand and coherent portfolio of businesses.

“We put the company in fighting shape,” Bitting said in an interview with ICIS. “Our mission now is to supercharge the growth in those sectors where our businesses are exposed to.”

OPEN TO DEALS IN CATALYSTS

He highlighted the Chem32 acquisition as an example of the type of deals that Ecovyst would consider. Chem32 has a technology and service component. Ecovyst is not considering any divestments, Bitting said.

Ecovyst’s refining customers had had a busy season, with average utilisation rates running at nearly 94% from the start of June through to mid-August, according to the Energy Information Administration (EIA). Over the past decade, that rate is near the high end of the range.

These refiners will need to conduct maintenance, which will include regenerating alkylate catalysts and swapping out hydrocracker catalysts.

Ecovyst serves a subset of the US gasoline market, since it regenerates sulphuric acid used as a catalyst in alkylation units.

Refiners have long called alkylate liquid gold because it is made with propylene and isobutane. Separately, neither one is blended into gasoline. But when they’re combined to form alkylate, the resulting blendstock increases octane while lowering the sulphur concentration and vapour pressure of the finished fuel.

The US and other developed economies have adopted stricter regulations that limit the sulphur content of gasoline. Emerging economies are adopting similar sulphur restrictions, according to Stratas Advisors, a consultancy. That should further increase demand for alkylate.

While all of Ecovyst’s alkylate catalyst regeneration is in the US, the company still has exposure to foreign markets because the US exports significant amounts of finished gasoline. According to the EIA, gasoline exports exceeded 27m bbl in May 2022, the highest level ever for that month.

“We view that overall, refining utilisation will be strong, which is good for the North American refining complex,” he said. “Specifically for alkylation, the underlying growth factors are strong independent of that.”

Like US demand for gasoline, that for diesel and jet fuel should continue recovering in the next couple of years.

A growing share of diesel and jet-fuel production will come from renewable diesel and sustainable aviation fuel (SAF).

Bitting expects renewable diesel to make up 5% of the total diesel fuel consumed in the US, up from the current 2%.

“Those are emerging and fast-growing technologies that have a lot of runway when you’re talking about renewable fuels,” Bitting said. “We have a nice exposure in this sector.” So far, a lot of the growth in renewable diesel production has been the result of California’s Low Carbon Fuels Standard (LCFS).

The standard calls for a gradual reduction of the carbon intensity of gasoline, diesel and their substitutes used in the state. Other states are implementing their own versions of California’s LCFS. More demand could come from federal laws. The Inflation Reduction Act will extend the $1/gal tax credit for renewable diesel to 2024 from 2022.

It also increases the value of the fuel credit for SAF. The base credit would be $1.25/gal, and it could reach a maximum of $1.75/gal if the greenhouse gas (GHG) emissions from the aircraft are reduced by more than 50%.

The EIA’s short term energy outlook expects production of renewable diesel to grow, albeit from a low level.

Ecovyst’s catalysts are directly consumed with PE production, so the company expects to benefit from robust demand and expanding global capacity of the resin over the next several years.

Among the new PE plants being built, Ecovyst is achieving higher adoption rates for its catalysts, Bitting said. For these projects, the PE producers want to produce resins with specific properties that target a particular application. Ecovyst can design catalysts that can help the plant produce PE with those properties.

“We develop the catalyst with them, and it’s a customised product for them,” he said. “We work hand in hand with them over time.”

For underlying PE demand, he expects that it should continue because the world’s population and economy will expand.

For pipes, companies are replacing steel with PE because it is more resistant to heating and cracking, Bitting said. If electric vehicles (EV) gain more market share, their growth should increase demand for PE and other plastics because they consume more resins on average than automobiles powered by internal combustion engines.

EVs require more wiring and electrical cabling, so that would increase demand for wire coatings made of PE.

Mid-decade, Ecovyst could start to benefit from catalyst sales to chemical recycling plants. These plants break down waste plastics into pyrolysis oil, which can then be used as feedstock to make plastic.

“We see that as a mid-decade opportunity,” Bitting said. It is potentially a large one for Ecovyst because of growing social pressure to address plastic waste.

“With our technologies, particularly our zeolite base, we can really bring a lot of value to that area,” he said.

In mining, sulphuric acid is used to leach copper oxide minerals. One of the main factors supporting more copper production is expected growth in the production of EVs. According to Ecovyst, EVs require four to five times more copper than automobiles powered by internal combustion engines.

Another trend supporting copper production is the need to upgrade the nation’s electric grid.

The US Department of Energy estimates that 70% of the nation’s transmission lines and power transformers are more than 25 years old. Last year’s infrastructure act set aside $65bn for power and grid.

The US power grid also will need investment to accommodate new wind turbines and solar panels. Bitting expects green energy will drive future demand for copper, be it from EVs, charging stations, wind turbines or solar panels. The sector could get another boost from the Inflation Reduction Act, which includes several provisions to encourage EVs and renewable energy.

Sulphuric acid is not used in lithium-brine extraction, but it is used to leach the mineral out of spodumene ores.

Demand for lithium could reach 3m-4m tonnes by 2030, up from 500,000 tonnes in 2020, according to McKinsey. It based its forecast on lithium carbonate equivalents.

For lithium and renewable products in general, keeping up with demand growth will be a challenge for Ecovyst and other companies that play a role in producing those materials.

“Our challenge is keeping up with the fast pace of demand for those end products. A lot of those things do not happen without sulphuric acid,” Bitting said.

For all of its businesses, Ecovyst will continue making safe and reliable plant operations a top priority. The company’s refining customers have been running their units at high rates to meet recovering demand in the US and the rest of the world.

“That rolls through to the reliability that we provide to our customers,” he said.

“Our challenge is keeping up with the fast pace of demand for those end products. A lot of those things do not happen without sulphuric acid”. 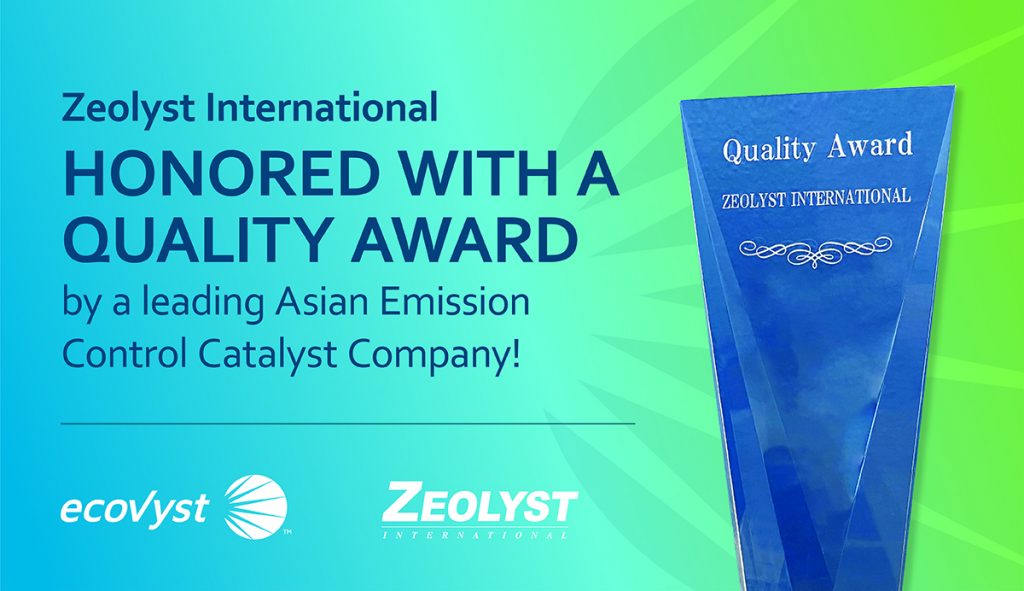 Zeolyst International (a subsidiary of Ecovyst, Inc.) was recently recognized and honored with a Quality Award by a leading Asian Emission Control Catalyst Company. Zeolyst International was selected for the award due to consistent high-quality service and products where factors such as packaging, customer service, on-time delivery and quality control were evaluated across their supply base. Zeolyst International is exceptionally proud to receive this award for the second consecutive year.

Congratulations to the entire team. Ecovyst Leadership team is very proud of the immense contributions in achieving this reward.