HOUSTON (ICIS)–Ecovyst, which has long made catalysts for hydrocrackers in oil refineries and polyethylene (PE) plants in chemical complexes, has found a new market in renewable fuels and chemical recycling.

Sustainability is one ofthe biggest opportunities for Ecovyst and for the catalyst industry as a whole, said TomSchneberger, president of the company’s Catalyst Technologies segment. He made his comments in aninterview with ICIS.

Companies and refiners are adding new renewable diesel capacity through conversions and newplants. The result has increased US production of the fuel, as shown in the following chart. Figures are in thousands of bbl/day. 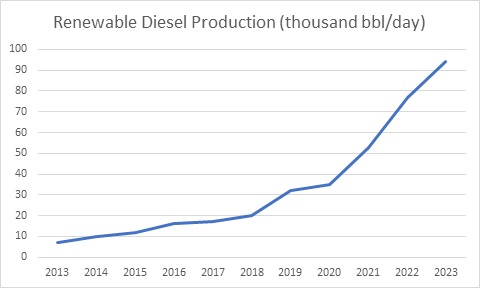 Ecovyst expects sales of its renewable-fuels products will grow by a compounded annual growth rate in the mid 20% range through at least the mid-decade, Chariag said.

Chemically recycling plastics could become another source of growth for the company’s catalysts. Ecovystis aligned with two of the companies that are in the lead in developing pyrolysis-based chemical recycling, Chariag said.

By 2024-2025, Ecovyst could have a full commercial line a catalysts for chemical recycling, he said. “It will be a pretty important business for us.”

It can be made by a similar process as renewable diesel, but the market is still nascent in its development as the economy improves, Schneberger said. Regulations for SAF are still evolving, and the economics are currently less favourable when compared with traditional jet fuel.

Still, if the airline industry wants to transition its fleet to a less carbon-intensive fuel, it will need a sustainable drop-in substitute for traditional jet fuel.
So far, airlines have started making maiden voyages with aircraft using SAF, Schnebergersaid.

The US is the furthest along in developing renewable diesel because of incentives and regulations, Schneberger said.

Oregon also has implemented an LCFS, and several other states are in the process of considering a similar standard.

Outside of the US, Canada has implemented its Clean Fuel Standard, which calls for the gradual reduction ofthe carbon intensity of fuels.

Schneberger said Europe is closely behind in renewable diesel. There is some adoption evenin Asia.

Ecovyst is focusing on western economies because the regulations and subsidies are already in place. The US already has renewable diesel plants, and companies are building more.

That is why the industry is placing so much focus on waste greases. It is also why catalysts and process technology are so important. They can allow plants to use a wider variety of feed stocks while improving the quality of the fuel and the yields of the plants.

Renewable diesel production is not expected tobe limited by feedstock constraints until at least 2024-2026, Schneberger said. Moreover, the industry is working on innovations to prevent those constraints from occurring.

“Folks are working to innovate so those limitations don’t materialise,” he said.

One variable that is hard to measure is Russia’s invasion of Ukraine. The war underscores the importance of having diverse sources of energy. That could increase interestin renewable diesel and other alternative sources of energy.

On the other hand, the war has disrupted supplies of sunflower oil, the third most traded vegetable oil after palm and soybean oil. The disruption tightened overall supplies of vegetable oils.

Given all of the variables of the war, it is too early to determine how it could affect renewable diesel.

For Ecovyst, the war has not threatened the raw materials it needs to make its catalysts for hydrocrackers, renewable diesel and pyrolysis, Schneberger said.

The energy transition has several years to playout, so the world will continue to need fossil fuels.

With that in mind, Ecovyst is continuing to improve its traditional products that serve fossil fuels, such those used in hydrocracking catalysts and emission control, he said.

Ecovyst can serve both ends of the markets while the energy transition unfolds.

“We feel very secure as a company that we can support the industry transition,” Schneberger said.

Currently, significant global events are resulting in an unprecedented pace of inflationary pressures on our raw materials, packaging, utilities and freight.

Due to these pressures, Ecovyst Catalyst Technologies, which is comprised of the Ecovyst Silica Catalyst business and Zeolyst International, will be introducing an energy surcharge policy across the entire product portfolio to reflect the current cost dynamics in the global energy market. The surcharges will become effective April 1, 2022 and will remain valid until further notice.

Our number one priority is smooth business continuity for our customers. We continue to leverage our global network to secure manufacturing and services efficiency. However, the increasing magnitude of recent energy related inflation can no longer be fully absorbed and require us to implement surcharges. We want to assure our customers that the surcharge policy will be closely monitored and is structured to adjust in either direction based on the incurred, elevated costs during this period of volatility.

Ecovyst Silica Catalysts and Zeolyst International will communicate the relevant surcharges, which are in addition to previously announced price increases, directly with each of our customers. Customers with questions should reach out to their local sales representative who is available to answer any questions you may have about this policy.

We remain focused on the continued supply of high quality products.

Join us May 30 – June 1, 2022 in Helsinki for the Petrochemical & Refining Congress: Europe 2022. The Congress is dedicated to ongoing technology trends and energy transition challenges that downstream industry deals with. Among topics raised are energy transition, sustainability, renewable fuels production, intelligent operations in refining and petrochemical operations, plastic recycling, usage of clean hydrogen and many others.. Please stop by our booth to meet with our representatives to learn more about how Ecovyst catalysts can help solve your most challenging petrochemical issues.

Join us March 22 -25, 2022 in Houston for the 2022 World Petrochemical Conference. This year’s conference will offer an unparalleled lineup of leading industry executives featuring major chemical companies and leading organizations discussing the critical issues that impact the chemical market, numerous networking opportunities and a variety of industry leading petrochemical training courses Please reach out and connect with our representatives to learn more about how Ecovyst catalysts can help solve your most challenging petrochemical issues.

In a recent interview with IHS Markit’s Chemical Week, Belgacem Chariag, Ecovyst’s CEO and Chairman, spoke on the company’s journey toward becoming a targeted pure play focused on catalysts and services better aligned with growth and sustainability trends.

The Future of Clean Fuel with Ecovyst

Ecovyst’s very own Lucy J. Innes VP of Sales & Marketing was interviewed by BCC Research, for their You Should Know This podcast series, on the topic of energy transition and the role zeolites play in clean fuel and sustainability. Great opportunity to learn from the experts about zeolite catalysts and its benefits in our environment.

The Future of Sustainable Innovation with Ecovyst

How does one develop innovative products that meet customers’ needs while also having a positive impact on the environment? And how can businesses blend those two ideals into a financially beneficial outcome for everyone involved? Paul Robbins, Vice President for Silica Catalyst, Ecovyst’s sister company, was interviewed by BCC Research, for their You Should Know This podcast series, on the topic of the future of sustainable innovation, and how Ecovyst carries it out across business.